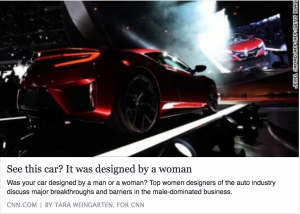 There are probably a lot of environmental reasons that I like them – relatives in the industry, a childhood spent riding a bike and wishing I had a car, that sort of thing – but there is also an underlying appreciation of what a car needs to do in order to be “successful”.  There isn’t  a singular definition of success, but we all know it when we experience it; and it is different for different people.

I have been lucky enough to be able to purchase cars that I have felt were successful – for me: a 1980 Range Rover, a 1999 Audi A6, a 2007 VW Touareg, a 2009 Land Rover LR3, a 2012 Ford Raptor, and a 2015 Golf GTI.  A couple of trends are pretty clear: one, we have certainly done our part in destroying the ozone with four of six vehicles in the SUV/truck category (to be fair, three of the four were purchased in Qatar where they were literally the difference between life and death, for a number of reasons).  The other trend is that half of our cars were VW/Audi Group cars.  I am going to focus on the latter trend, and not because I am embarrassed about our SUVs, as those who know me are well aware – I loved my truck: 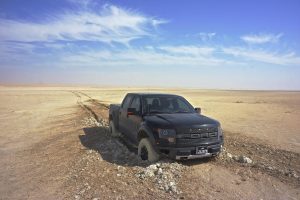 No, I want to focus on the VW/Audi cars because perhaps the most important element of their success was their interiors – and, specifically, the materials used there.

If you’re a car person, the fact that Audi makes some of the best interiors in the business is not news to you.  This was made abundantly clear to me in 1999 when we purchased our “Andorra Red” A6.  I have no idea how the micronation is associated with a slightly too-purple red, but it is.  Problem was, I didn’t know then.  We were quite underwhelmed with our eggplant-mobile’s exterior.

What we came to realize, however, was that we absolutely loved the interior of the car: everything felt good, and everything worked with a purpose.  I think that I opened and closed the credit card tray (which I didn’t even know was a thing) about a hundred times, marveling at the damped mechanism’s slow delivery of the drawer.

There were “luxury” materials – leather and brushed metals – but the most striking thing was the absence of hard plastics.  All together, every surface was a pleasure to touch, they muted noise inside the cabin, and contributed to a structure that (until I smashed the windshield – which is another story) never squeaked or rattled.  Materials served their purpose as the true human “interface” of the car.  We loved to spend time in there – as the milage on the car would ultimately attest – so much so that we didn’t really care what the outside of the car looked like.

The point of the article at the beginning is that there are very few women in the world of automotive design, and that “the vast majority of female car designers are employed doing decorating-type jobs.”  While the emphasis is mine, one would be hard-pressed not to see the descriptor as having a derogatory tone.

I don’t see Design as being a male or a female thing – good design is just good design.  Some vehicles are described as “butch” or “curvy” or “macho” or “graceful” – but don’t all of those appeal to men and women equally?  My issue is not with gender roles in car design.

My issue is with the dismissive tone given to the design of the interiors and the selection of finishes.  I would argue that this is perhaps THE most important selling point of the car to most people and – therefore – a critical role in any design team.  If that role is commanded by women, then they seem to be doing a great job of turning things around.

Over the last 10 years, the quality of interior finishes in all cars – even American cars – has improved tremendously.  Even Bob Lutz, one of the manliest men in the auto industry, recognized the importance of this: “The exterior sheet metal has to be absolutely perfect. And they want gorgeous interiors, where everything fits and the materials feel rich.”  There’s that word again – “feel”.

It’s not a color. It’s not a pattern.  It’s not even a design.  You can’t design tactile feel (in this case – don’t get me started on “haptic feedback screens“).  That’s all materials, and the better people know them, the better their products are.